Becoming a single parent was both the worst and the best thing that has happened to me. 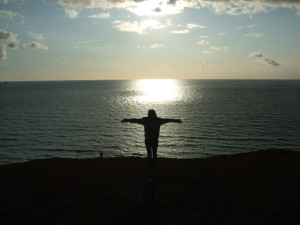 At the time, it was devastating: I felt I had screwed up my life and my children’s lives. Fundamentally. Irreversibly. Unforgivably. I had failed at the most basic level of being a parent, I had broken something that could never be fixed or replaced.

It is only now, with over a decade of distance, that I can look back at that first year calmly and understand the stages in my journey towards acceptance and self-forgiveness. This is the story of my transition.

All change starts with denial. In my case, most of this happened prior to the break-up. By the time my first baby was six months old I knew deep down that we weren’t going to make it, that my husband would leave. This just wasn’t the right life for him. For three years I did everything I could to ignore that voice or to prove it wrong. I have never been good at quitting, but once you have children the decision becomes so much harder. How bad do things have to be before the alternative is better? How much can I tolerate, how low can I reduce my expectations, how little can I value myself before I give up hope on a perfect childhood and do something that I know will blow their worlds apart? How is it possible to know what is better, what will be worse?

Years later, my eldest son told me that his earliest memory was sitting on the stairs listening to his parents fighting. I’ll never know for sure whether I held out too long or if I should have kept trying, but one night my husband packed a bag and the decision was made for me.

My first reaction was relief. It was over. I wasn’t being shouted at any more. I dimly realised that there might not be much kindness coming my way in the future, but the cruelty had stopped, the line was drawn, and I was elated. Becoming a single parent meant that at last I could take control, make plans, move on and start rebuilding. I threw myself into becoming a single parent like a manic project manager, finding ingenious solutions to practical obstacles in a desperate impersonation of a perfect mum. I knew I wasn’t really happy, but at least now I had hope that I would be happy one day in the not-too-distant future.

But it turned out that being a single parent with no money looking after a one-year-old and a three-year-old wasn’t so easy. When you’re a single parent, it’s always your turn. When they wake up at 5am, it’s your turn. When the stinky nappies need rinsing, it’s your turn. Emptying the bin, washing up, raking up the leaves, reading the story, clearing up the Lego, playing their favourite game – there is so much to do when you have young children and when there is only one of you it is relentlessly, constantly, always your turn.

The silence took it’s toll too. Getting the children to bed at 7.30pm gave a few moments of sweet relief, but then the long evening would stretch out before me and I would find myself turning on every electrical appliance in the house – TV, radio, washing machine – just to numb the silence. I looked everywhere for a solution to put our life back on track: I thought about emigrating to Australia, joining the Foreign Office, moving to Bristol, marrying for money, going round in ever-decreasing circles as I realised that there wasn’t a quick fix that would magic up a wonderful new life for us.

I remember the moment vividly. It was a sunny day in June, six months after the break-up. We had the beach to ourselves. The boys had found a huge hole that bigger children must have dug at the weekend and they were having the time of their lives. Running free range across the beach, playing chase with the waves, jumping in the hole, digging tunnels, an idyllic childhood moment. And I realised all in a rush that I could steer us to happiness, I could create them a normal happy childhood, that all was not lost.

But sitting there watching them being wonderfully, beautifully happy, I understood with a grim finality that I would always be alone in these moments. I would never sit here and share this moment with someone who saw the children through the same lens of utter love as I was doing. With someone who was also their parent. That was what I had lost, and that could never be got back. I was ready to create the future, but I understood what it meant.

There were, of course, many more stages and many more ups and downs after that and, in truth, it took a little bit longer for me to give up all hope for a magic wand that would somehow make everything better. (Those illusions of perfection are very powerful!). But having been a joint parent, a single parent, and now a married-to-a-new-partner parent has helped me see that there is no ideal set-up. There’s just doing your best to find a way for everyone to thrive.

No matter what life throws at you.

4 responses to “Becoming a single parent: the change curve”

When work intrudes into family time

A guest post by Helen Beedham on 5 ways to negotiate work/family boundaries harmoniously at home. Have you ever tried to send a ‘quick’ work email during family time and half an hour later,...

Parenting as a team (despite different parenting styles)

There is something about caring for children alongside someone else that really highlights your differences. Whether it’s friends, your mother-in-law or your partner, you never really know...

Helping children through divorce and separation isn’t easy and there are no pain-free solutions. Being strong and calm and rational at a time when emotions are running away from you can be a real...

Being a step-parent means occupying a unique place in a child’s life. Every step-parenting situation is different and there are no exact rules on how to get it right. Lots of step-parents...