Becoming a mother: my story

For me, becoming a mother was like being hit by a bus. I knew there was a baby coming and that babies were full-on and hard work but I was not expecting the complete shift in my identity that I actually experienced. I didn’t see it coming. 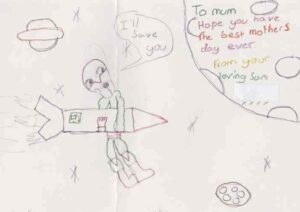 I was in my thirties by the time I had my first baby and I had lived a wide and adventurous life. The baby was conceived while I was living in Mongolia, a place where life and death come and go daily in a nomadic life too focused on the basics of food, fuel and water to get introspective about identity. I waddled back to the UK at 34 weeks feeling like a cow about to calve, more concerned about how I would fit all the baby kit into my suitcase to take back to Ulanbaatar than about how becoming a mother might change me.

And then the bus hit me. It turns out, babies aren’t just a practical undertaking after all.

For the first two months I sleepwalked in a post-traumatic haze: I was a mother who hadn’t yet become a mother and I was utterly conflicted. I couldn’t let go of the pre-birth me (the person I had invested 30 years into becoming) but I couldn’t see how to be that me in the face of the sheer scale of demands and love that had arrived with my new baby.

The first time my husband and I went out alone together after the birth (a rushed birthday meal when the baby was 12 weeks old), I remember sitting in the restaurant looking around at all the other diners baffled by how people all around me all my life had been undergoing this seismic identity shift without me realising. Why did no-one talk about it? This couldn’t be right. On an almost atomic level, I felt like a different person. And I wasn’t ready for that.

The baby manuals were no help at all. They didn’t give me a clue about how to cope with the avalanche of emotions (good and bad) that were knocking me off my feet.

I thought maybe it was just me. I must be abnormal. I just didn’t know how to be this new mum person. Reading all those baby manuals had made me feel that there was a right (and a wrong) way to do everything connected with motherhood and I felt very alone. Other new mums would talk about practical stuff – breastfeeding, sleeping, exhaustion – but nobody else ever said “I have absolutely no idea who I am any more and that scares me witless because who I am is important to me, it’s what keeps me going.” And I was screaming that inside.

Maybe they were all having their own existential crises on the quiet, or maybe not. But somehow, over time, I stopped fighting. Stopped trying to reconcile old with new and just accepted the new. Embraced being a mother (I guess there was no other choice!).

Becoming a mother was the making of me.

Which isn’t to say I wasn’t a nice or worthwhile person before I became a mother, just different. Becoming a mother has stretched me, and not just physically. My capacity for tolerance, kindness, self-sacrifice, patience and circular conversations have all expanded. I now find value in the everyday that previously I sought only through travel and adventure. I experience real excitement in the adventure of watching my children unfold and develop. And I have learned to know fear. Becoming a mother, I have discovered that love is huge, scary and uncontainable.

And I have learnt to live with that.

This post originally appeared on www.motherhoodtherealdeal.com as part of the #beingamother project.

14 responses to “Becoming a mother: my story”

If you have ever tried to tell a young child who is in the grip of a big emotion to “Calm down,” you will know that often doesn’t work. Children need much more concrete strategies...

Not being able to play with friends has been tough for children during the coronavirus lockdown. Young children are programmed to play. Play fuels their development and it is through play that they...

This is a guest post by Susie Robbins There is a lovely saying that I regularly repeat to my children: “Mistakes are proof that you have tried.” When we make mistakes, it is easy to give...