Please do adhere to local social distancing regulations at the time of reading this!

Not being able to play with friends has been tough for children during the coronavirus lockdown. Young children are programmed to play. Play fuels their development and it is through play that they learn the social skills to take turns, work in teams and build relationships. However, with social distancing here to stay for a while, there’s unlikely to be a sudden return to traditional play dates or playground games. We are all going to have to learn new ways of playing together in socially distanced games.

Children are naturally inventive so I am absolutely sure they will have no problem adapting and will come up with brilliant ideas for games (much better than mine!). But it might help them get started if you set them up with a few ideas. So, here are 16 ideas for socially distanced games to get them playing safely.

Whether you are meeting up with family in your garden, doing play dates in the park or even hosting a socially distanced birthday party, there are some great games that children can enjoy and still stay at least 1 or 2 metres apart. You’ll probably remember most of them from your own childhood! And this list is also a great starting point for children who are heading back to school and wondering what they can do in the playground. All these games can be played without the need to pass any objects between each other. And almost all of them are screen-free – which is a great rebalancer after the digital overdose in lockdown. Enjoy!

If you are venturing out to the park or to a friend’s garden for play dates, these games are perfect for small groups or pairs.

Some of these involve a lot of running around so really need a big green space. Others are played sitting still so you could play them in a garden. 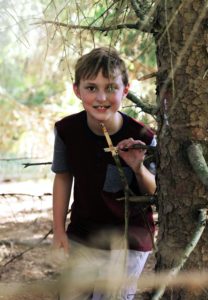 Best with an adult

There are lots of traditional party games that can easily be played even 2 metres apart. These ones work best when led by an adult.

There is no reason why adults can’t get in on the play action too. If you have another family over for a BBQ, for example, these games can be played in household teams.

This is a guest post by Susie Robbins There is a lovely saying that I regularly repeat to my children: “Mistakes are proof that you have tried.” When we make mistakes, it is easy to give...

Fun card games for children of all ages (by Ellie Dix)

Regular readers will know that I am a huge fan of a pack of playing cards as a screen-free pocket-sized boredom buster. And while the coronavirus is keeping us all cooped up indoors, I’m sure...

Getting outside with children is great for their development as well as for overall family well-being. But there are times when it just can’t be done. And, with the current Covid-19 coronavirus...

12 ideas for outdoor play when it’s cold or wet

Getting outside is great for everyone’s well-being. And children love the outdoors because it’s always changing – every time you step outside your front door is a little different...